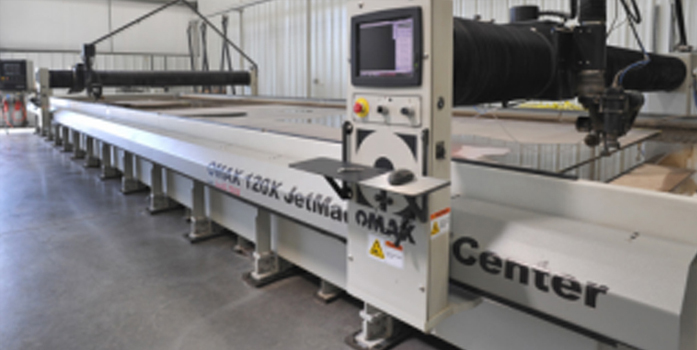 Last year all the technological pieces fell into place for WaneShear Technologies LLC, enabling the company to successfully fabricate the world’s first WaneShear. The unique lumber-cutting system was a longtime dream of Ron McGehee and his son Clark and only recently became a reality as a result of today’s advanced servomotors and high-powered computers.

With the sale of its first WaneShear system, the shop opened the doors of its new Ukiah, California facility. Headed by Clark McGehee, the shop is in full production of WaneShears and is currently able to build about four systems per year. But with the help of increased efficiency delivered by OMAX® abrasive waterjet cutting technology, output could increase to six or even eight machines a year.

Unlike regular saw mill edgers where rough lumber moves into stationary saws, the WaneShear passes saw blades through lumber as it remains stationary. The result is what could be considered the fastest system of its kind and one that processes approximately 60 boards per minute –17,000 boards per shift, and does so at a cut accuracy within 0.015″. The completely electric system cuts boards much faster than existing edgers, lowering a saw mill’s manufacturing and processing costs.

A complete WaneShear system can measure up to 80′ long and either 35′ or 45′ feet wide. One system is comprised of several hundred fabricated and machined components. Many of these are made from 8′ x 20′ plates of common and 4140 steel, aluminum and other materials such as fiber felt and Delrin®, in thicknesses ranging from 0.250″ to 1.5″. Individual part sizes can be as small as 1″ x 1″ x 1″ or as large as 94″ wide and 36′ long.