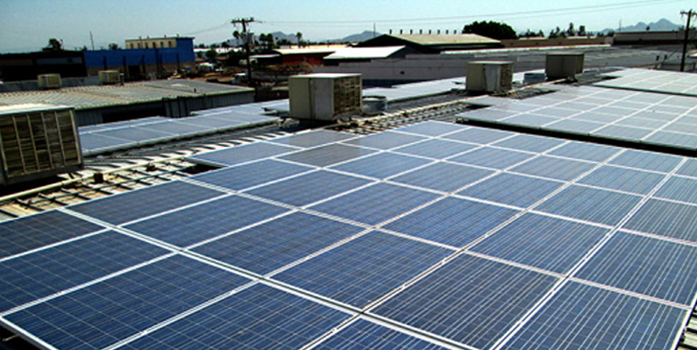 The owners of Creedbilt, Inc. have joined the leaders of some of the brightest, most competitive companies in America by choosing to power their business using solar energy.

The company operates 40 hours a week and powering all that machinery requires considerable energy.

A desire to run an environmentally friendly business, combined with rising electricity rates, led owners Jeremy and Jason Creed to do a cost-benefit analysis of converting the 10,000+ square foot Creedbilt facility to clean solar energy.

While average electricity rates are increasing across the country, the cost of installing a solar power system has dropped significantly in the past few years. In fact, the average price of a completed commercial PV (photovoltaic) project has declined 45 percent since 2012, according to a report from the Solar Energy Industries Association (SEIA).

The Creeds estimated the solar panel energy system would pay for itself in about five years.

Recognizing the sound investment in both the environment and the business, the Creeds set to work at converting the facility to run on solar energy. They also decided to install the 186 rooftop solar panels and four inverters themselves.

In July of 2014, Creedbilt’s solar energy system was put into service. The shop is still connected to the grid. If the shop uses more power than the solar panels produce, it draws power from the grid. When the solar panels produce more power than the shop uses, the excess power is put on the grid. “In a week period, our system is tending to make more power
than we consume,” says Jeremy Creed. And the local utility pays Creedbilt for those excess kilowatts. Based on the savings the company experienced during their first year after going solar, the conversion cost will “probably be recovered in 3-3 ½ years,” predicts Jeremy, which is even sooner than expected.

Creedbilt understands the importance of continually investing in innovative ways to reduce operating costs, keep the impact to the environment minimal, and keep business rolling in the doors.

Going green with solar power and an OMAX abrasive waterjet system is paying off for this business dedicated to producing high-quality, competitively-priced products with minimal ecological impact.