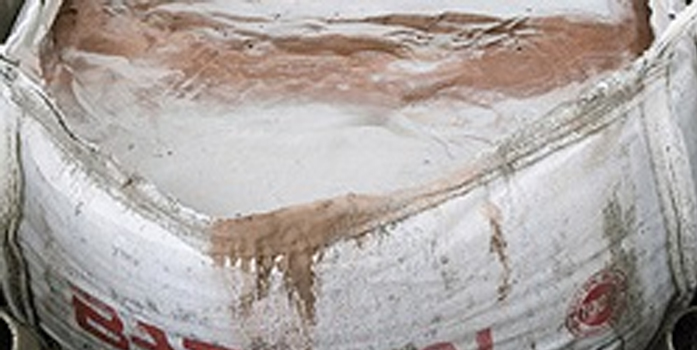 With subtractive machining processes, the discussion eventually turns towards what to do with the collected leftover bits. While CNC mills have to worry about material chips and oils, abrasive waterjet users have to deal with spent abrasive. With abrasive feed rates capable of exceeding 2lbs a minute, that spent abrasive can accumulate at a very rapid rate. What to do with that used abrasive tends to fall into three categories: disposing, recycling, and repurposing.

Just Toss It Out Back: The Disposal Method

Undoubtedly the easiest solution, or so it seems, would be to throw out your used garnet with the rest of the trash. In many cases this is perfectly acceptable, as garnet abrasive is, for the most part, an inert natural substance. However, you will want to check with your local environmental codes to see if the small pieces of eroded material that are mixed in with the abrasive will be a problem. Obvious material contaminants such as lead or beryllium will quickly eliminate the “just throw it away” model, but there might be other contaminants that render your spent abrasive unsuitable for this simple disposal method. Contracting with a service to come out every few months and suctioning your catcher tank can simplify this process as well.

Let’s Squeeze Every Penny Out Of It: The Recycle Method

A study done in the early 2000s in India showed that only a portion of the garnet used during the cutting process actually cuts the material, eroding itself in the process. The rest of the abrasive collected in the catcher tank remains sharp and can still be viable as a cutting abrasive. To that end, several companies have proposed abrasive recycling systems that can take the used abrasive and, through a drying cycle and a sifting process, produce usable abrasive for cutting. However, that same study also pointed out that fragmentation occurred more often in the nozzle than during cutting. So while only a fraction of the abrasive is eroded during cutting, much more is fragmented and thus turned into a finer grit, limiting its recycled usage. On top of that, the costs of operating the recycling equipment can exceed the cost per pound of garnet.

The used garnet can be used straight from the machine to make pathways and such, barring any toxic materials that might have been cut (environmental codes apply here, perhaps more so than with disposal). A better choice, though, would be mixing it in with concrete, as the nature of garnet makes it a rather good additive. Its hardness strengthens the concrete, and its sharp edges help bind it together. Whether making garnet-coloured paving stones for your own shop or offering it up to a local concrete plant as an additive, this re-purposing method can make for a colourful and useful outlet for your used abrasive.

With several options available, there is no shortage of disposal methods, and likewise no reason you need to restrict yourself to just one method. If you have regularly disposed of your garnet in the past, try re-purposing or recycling a portion and see if either of those options might be a viable avenue for your spent abrasive.