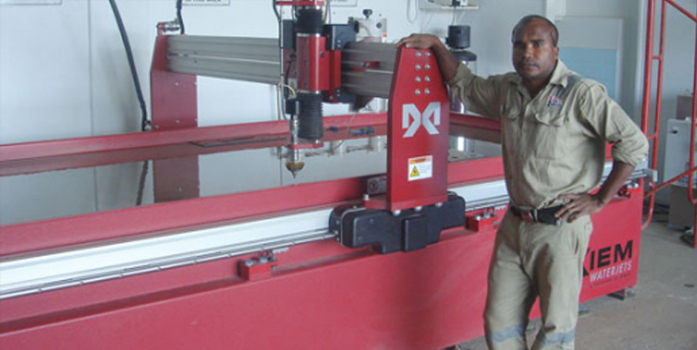 Papua New Guinea is a rugged country with limited industry, yet it is the seventh fastest growing economy in the world. Succeeding in this challenging environment requires dedication and innovation, and for Steel Industries Ltd of Port Moresby, dedication and innovation come naturally. Established in 1967, Steel Industries has decades of experience in dealing with the challenges of fabrication in Papua New Guinea, such as gaining access to raw materials. Since it takes anywhere from three to four months for stock to get to Papua New Guinea, Steel Industries maintains several millions of dollars worth of stock on site. This allows for rapid turnaround of parts, as there is no wait time for the right metal to arrive from overseas.

Traditionally, Steel Industries did their fabrication in the old-fashioned way of tracing paper templates onto sheet metal and cutting it with a handheld oxy torch. This took time and required a skilled cutter to ensure the precision necessary, and even then secondary processing was often needed to produce a finished part. While at the Austech 2011 tradeshow, Steel Industries discovered the versatility and ease of use of the MAXIEM abrasive waterjet system. Its cold-cutting process and fast cutting speed led Derek Hunter of Steel Industries to purchase a MAXIEM 1530 JetCutting Center with a Motorized Z Axis. With an X-Y cutting area of 3099mm x 1575mm, Steel Industries is using their MAXIEM 1530 to cut a wide range of material sizes up to 50mm thick.

The MAXIEM 1530 is Steel Industries’ first CNC cutting machine, and right away it has made a difference. The confidence Hunter has in the machine has led to an increase in business, including exporting of parts, something they have never done before. The ease of use was an important feature for Hunter. Training is simple and setup quick, significantly shortening production times. After having the machine only four months, the MAXIEM is running six to seven hours a day, five days a week, cutting everything from fiber cement to mild steel.

An example that highlights both the challenges of machining in Papua New Guinea and the versatility of the MAXIEM JetCutting Center came when Steel Industries was tasked with replacing a broken crane part. With the crane located across the island, the normal lead times for replacing a part in that remote area was around three weeks. The crane owner traced the broken part and faxed it to Steel Industries, where they took that drawing and imported it into the Intelli-MAX Software Suite and created the CAD file for the MAXIEM to cut. While it was cutting, the crane owner took a helicopter to an airfield and then flew a small plane to Port Moresby to pick up the part. Within a day the crane owner had the replacement part and was able to be back in business, rather than go through three weeks of downtime waiting for traditional channels to deliver the part.

Custom fabrication work continues to open up opportunities for Steel Industries. The ability to quickly machine non-standard flanges, for example, or backing plates for sheet pilings, parts that traditionally were difficult to source, create possibilities that could not be realized before. Steel Industries is looking forward to new potential revenue streams that the MAXIEM 1530 can provide, and Hunter notes that “this machine has opened up outside work we had never contemplated.” As their confidence in the MAXIEM JetCutting Center continues to grow, Steel Industries is ready for expanded opportunities.