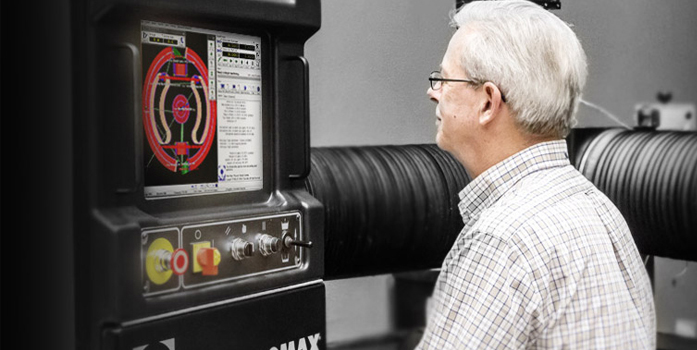 When it comes to evaluating abrasive waterjet performance, cutting speed is typically one of the most important attributes. There’s been a lot of discussion in the industry around cutting speed and pump power. But that’s not the whole story if you’re cutting anything other than a straight line. If you’re cutting parts with any kind of complexity, like corners, curves and pierces, software has a huge effect on cutting speed.

Cutting Tool Characteristics
To understand software’s role in cutting speed, it’s important to know about the characteristics of a waterjet’s cutting tool, the jet stream. Unlike rigid cutting tools, such as what you’d find on a CNC lathe, the jet stream is “floppy.” It bends and wobbles from side to side and the shape of the stream changes depending on how fast it’s moved. As the nozzle moves, the bottom of the stream lags behind the top. This jet lag isn’t a big deal on straight lines, but it’s critical around corners. If the jet stream is moving fast and doesn’t slow down at an inside corner, the bottom of the stream won’t catch up to the top and the corner won’t be square.

Acceleration also affects the shape of the jet stream. After slowing on an inside corner, you want the cutting head to accelerate again to reduce cutting time. But if the acceleration is too quick, the stream can kick back and gouge the bottom of the material, ruining your cut quality.

Piercing also affects overall abrasivejet cutting times. And we know from extensive model testing that for each material, pump, nozzle and abrasive combination, there is an optimal pierce length, time and traverse speed.

Whereas the machining speed of a CNC lathe is almost entirely dependent on the material being cut, an abrasivejet relies on perfectly timed acceleration and deceleration of the cutting head for optimum cutting speeds.

Intelligent Software Optimizations
Just like a professional race car driver knows exactly when and how much speed is needed in order to navigate a race track as fast as possible, the sophisticated controller software in OMAX and MAXIEM JetMachining Centers automatically decelerates and accelerates the cutting head at precisely the right points along the tool path for optimal speed at the desired cut quality.

The Intelli-MAX software analyzes the geometry of the part in relation to the material and the desired cut quality. Then, based on our 4th generation cutting model, the software calculates the best speeds and accelerations for all curves and corners, sets the best length and feed rate for all pierce points and adds special “corner pass” elements at corners to allow the cutting to go right past the corners where it can. The OMAX controller software not only optimizes tool paths automatically, it also gives operators precise predictability as to the cutting speeds, jet lag, taper and other factors of those particular tool paths.

All this intelligent software optimization is built right into the OMAX and MAXIEM abrasivejet controllers rather than into the CAM system. The cutting speed and quality are independent from the CAM software that created the tool path. You’ll get the same fast, high precision end result from the first pierce through the last corner, part after part, no matter what CAM software was used to create the tool path.

But there’s more to speed than pure cutting time. There’s also set-up time. Since all the intelligence is built into the controller software, the operator simply enters the material type, thickness and desired cutting quality and the optimal motion speeds are automatically chosen by the controller. You can even take the tool path file from one OMAX machine to another OMAX with a different pump and nozzle and cut with the same end result without re-programming the part.