Using water as a cutting method for soft materials has been around for decades, but early forms such as the paper metering system by the Paper Patents Company in the 1930s used relatively low-pressure water. High pressure waterjet technology truly took form in the post-war era, resulting in faster cutting and greater precision. Reliability remained a challenge, though, until the early 1970s when Dr. John Olsen, VP of Operations at OMAX Corporation, developed the first reliable ultra-high pressure pump.

While early waterjets could easily cut soft materials, they were not effective in cutting harder materials such as metals. This capability was achieved by adding an abrasive to the waterjet in the cutting nozzle after the jet stream was formed, based on a technique that had been pioneered by Elmo Smith and Leslie Tirrell in the 1930s in the field of liquid abrasive blasting. Early abrasive waterjet nozzle life was too short to be commercially viable, but material innovations in mixing tubes by Boride Corporation eventually resulted in a commercially acceptable nozzle. With the combination of a durable abrasive waterjet nozzle and a reliable high pressure pump, an abrasive waterjet machine could now cut a wide range of materials, including hardened tool steel, titanium, stone and glass. 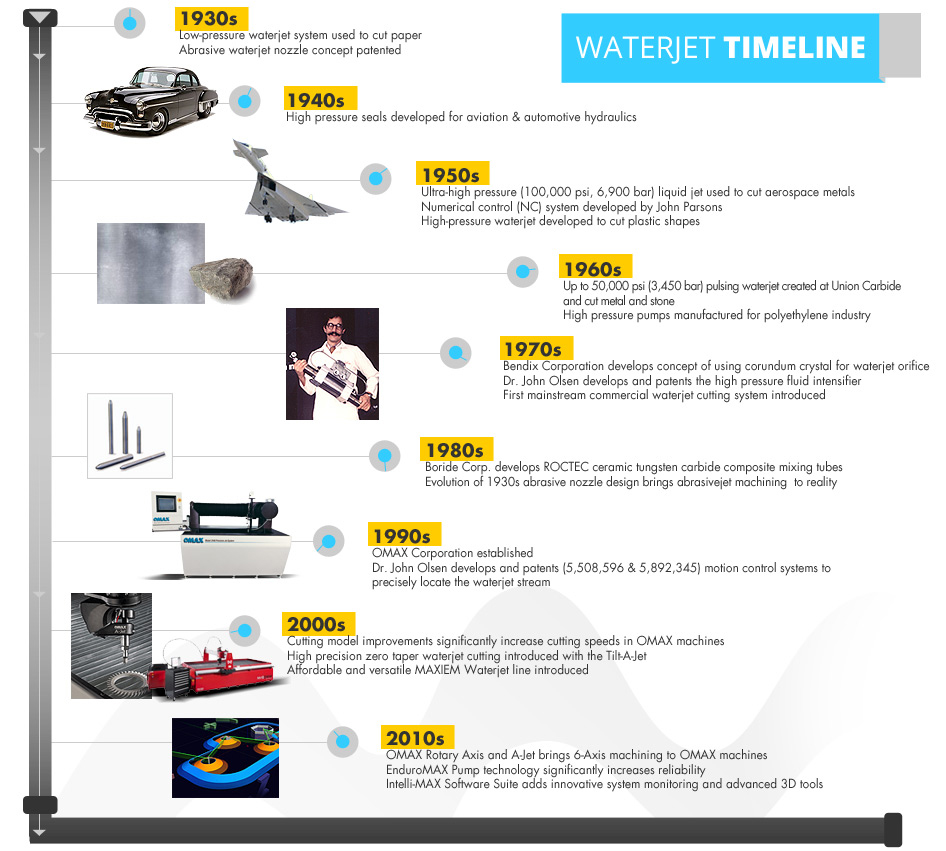 The Future of Waterjet – OMAX Innovation

The combination of reliable pumps, reliable nozzles and easy-to-operate accurate control systems makes waterjet cutting suitable for any manufacturer or job shop for cutting almost any material quickly and accurately–making waterjets the fastest growing manufacturing technology in the world.

The final barrier to full commercial acceptance of abrasive waterjet cutting was the challenge of controlling the waterjet to create an accurate part because the waterjet stream bends as it cuts. Traditional CNC controllers are not well suited to making the subtle motion changes, and early waterjet cutting systems required an experienced operator and a lot of trial and error programming. Dr. John Olsen turned to the power of the PC as a solution to the challenge. Dr. Olsen accurately modeled the dynamics of the waterjet stream along all points of the cutting path. He was able to predict the effect of the jet bend and use precise control of the nozzle speed to account for it. All OMAX and MAXIEM abrasive waterjet have a distinct advantage because they’re built using this control technology.